The Times of London headlined last week, 3.25.08, "Britain is world's 7th most stable and prosperous nation". The article, by The Times' defence editor Michael Evans, refers to a report by Jane's Information Services, Ltd., and overseen by Christian Le Mière, managing editor of Jane's Country Risk. Evans' article lists the UK on place 7 and the US on 22, which relates to quantified rank (97 v. 93 points of 100). Excluding ties, The Times puts UK 8th and US 24th.

The Top 24 "most stable and prosperous countries in the world":

The list ranks 235 countries and dependent territories recognized by the United Nations, like Falklands (UK) or Guam (US). The Times states that the list was generated by a year-long investigation.

The goal of Jane's ranking was to determine life quality in terms of stability and prosperity, in a "global assessment of every nation's achievements and standards." Stability and prosperity were parsed as social achievements, threats faced, and pressures suffered. According to Le Mière, the rating "took into account each nation's political structures, social and economic trends, military and security risks and external relations".

The US scores 93 out of 100, "partly because of the proliferation of small arms owned by Americans and the threat to the population posed by the flow of drugs from across the Mexican border."

The supreme domestic goal of the US Republican rule since January 2001 has been stability and prosperity, concepts meant just as Jane's intended them. Jane's has a fivefold focus on defence, security, transport, public safety, and law enforcement.

This is measuring Republicans by Republican standards.

And this is the result?

"Twenty-four" is the ranking of the nation ...

... that has the most weapons on the planet?
... that spents more than any other country on security?
... that imprisons the worldwide largest portion of any society?
and
... that's arguably fighting in Iraq for reasons of "transport"?

(Add the facts -- Iraq was about oil, and we need oil to get around, since we lack bike paths and bullet trains.)

This is not a ranking of the US based on deep-ecological criteria dear to the Mad Hun's blogging heart, such as Enlightenment, Humanity, Sustainability, and Climate Education & Control.

The USA is flunking Mad Hun criteria, but that's beside the point. Since 2001 and counting, we had to learn that American humanity is spelled "Guantanamo Bay"; that American enlightenment is spelled "Cheney"; that American sustainability is spelled "Tampa Bay"; and that the state of climate education and control is globally reflected in USA v. Bali 2007, and locally mirrored in the plan of the USF Honors College to cut the Climate Seminars slated for 2008-2009. None of this matters; it's all beside the point. The point is that Jane's ranking is a ranking by the Bush-crowd's own standards.

Ironically, The Times report highlights the substance of environmental thought. When a culture embraces postmodern contempt for verifiable reality (a contempt also known as Rovism), pretends there're no biospherical constraints and environmental patterns worth its attention, and disdains the policy goals of replicability, humanity, and evolution -- well, then, such a culture is pushing the "down" button in the cosmic elevator of fate.

There's little you can do then.

... except, maybe, watching an elephant paint a self-portrait.

Number One: 2001 A Space Odyssee (1968)
According to this film, in year 2001 we would have had manned voyages to Jupiter, a battle of wits with a sentient computer, and a quantum leap in human evolution. Instead we got the Mir Space Station falling from the sky, Windows XP, and Freddy Got Fingered.

Calculate your water use Alternet 3.22.08

On Thursday, March 20, 2003, at 9:30 pm EST or 530 hours local time, bombs started falling on Baghdad. Nineteen days later, on April 9, U.S. marines secured the Iraqi Oil Ministry. Again three weeks later, on Mayday, the Climate-Changer-in-Chief appeared in uniform on the screens of a worried planet and declared the mission accomplished.

Five years or one hundred thousand corpses later, Baghdad is the worst place to live on Earth. In terms of public relations, the American Dream has earned a Darwin Award. It wasn’t that long ago that “America” used to evoke cool images to the world—Martin Luther King; John F Kennedy; Jimi Hendrix.

It wasn’t that long ago, either, that the letters “USA” stood for stunning environmental legislation and universal human rights. Eight years into the new millennium and five yeas into Iraq have turned them, at least for the time being, into a detested symbol of blood, oil, and climate change.

Five years that could have been devoted to spearheading the switch to a post-carbon economy had been wasted, instead, on fighting over oil. The money poured year after year into the war effort, for the sake of maintaining the fossil lifestyle, is the very money that would have made a conversion to a viable infrastructure easier. Better Americans than the ones not yet impeached would have used the five years to invest in solar and wind, to build bullet trains and bike paths, and to make Kyoto and Bali work.

And the worst of it is: everyone knows it.

Suppose, this will be it, and nothing much changes anymore. Suppose the Green Zone will remain a place for arms dealers and oil companies; anything outside of it will be an American-made wasteland. Suppose Iraqi oil will be taken by multinationals that will line the pockets of U.S. leaders. Suppose people will keep dying; politicians will keep lying, and suppose the evening news from the Mideast, forever and ever, will remain the journalistic version of Groundhog Day. Suppose this will be it.

What stories shall future generations tell their children about Americans in Iraq?

Right now, odds are that the stories would go somewhat like this:

Time turns the complicated into a cartoon. It turns the multi-hued into a monochrome, and it reduces the evenhanded to a moral. Less than a lifetime was needed to distill the chaotic events of WWII into a clear-cut story with one point everywhere: Nazis lose in the end, for what they do is destructive, unsustainable, and self-reducing.

Now we risk leaving behind a similarly cartoonish and inexcusable legacy. Seen from a distance, either across continents or over generations, there’s no reason to single out Bush, Cheney, or Rice, since there is no impeachment. So the future campfire story, of the oil-stealing, orb-blistering, and climate-changing Americans in Iraq, is now in the making. But the story is still a little bit fluid; there’s still time before it crystallizes.

What would it take to tweak the conclusion and end on a better note?

Formally the answer is simple. A happy and hopeful ending would be one in which the Iraqi people, who were beaten up for no good reason in the first place, come out as winners. As soon as the story now in the making would lead to something like, “in the end, before everything ran out of control, the large people created a good deal for the little people, stomped on the oil habit, and started carbon sequestration,” the name “USA” would not become an insult. Mixed messages undercut simple morals.

There are two ways of making this work.

clean up, rebuild, and leave the assets in peace;
that is, let the Iraqis nationalize their oil industry and go home.

clean up, rebuild, and integrate Iraq;
that is, let the Iraqis naturalize as U.S. citizens and turn Iraq into a Puerto Rico, Hawaii, or Alaska.

Either way, everyone wins, nobody loses.

Yesterday was weirdly poetic. Some of my colleagues are bushists, so the seminar room displays the flag. During the five-year anniversary, the light shining on the flag flickered all day long.

The markets worsen, despite a massive federal infusion of cash. The limits to growth, predicted by the Club of Rome a generation ago, appear to be reached. In the short run, this means suffering for many families. But in the long run ... ? I wonder. Will it be good or will it be bad? Might it not be an opportunity, at long last, for a new Enlightenment? And in the face of the ubiquitous, systematic, and continuous Dumbing-Down of America since the 1970s, when the hippies dropped the ball, came down from their karmic high, and became god-fearing materialistic SUV-driving suburban home owners with credit cards & kids -- isn't it time for a new enlightenment?
Isn't it time for progress from wimpy greed to savvy sustainability? Isn't it time for the move from timid stupid Cheney-World to a smart and ballsy Deep Ecology?

Meanwhile, via Mercer we get the 2007 Health and Sanitation Index. It's a reminder of Arne Naess' distinction between "standard of living" and "quality of life". In terms of "living quality" (so Mercer), the top ten ranked cities on the Planet are:

... NONE of which is in the United States.

According to Mercer's just released 2007 list, the highest ranking U.S. American cities are at the bottom of the top thirty: 28. Honolulu, and 29. San Francisco. In global comparison, better living is found in 3 Swiss, 13 European Union, 5 Canadian, 2 New Zealander, 3 Australian, and 1 Norwegian cities.

In terms of quality of living, the absolute pits, the bottom of the barrel, so Mercer, is Baghdad, Iraq. Thank you, George Bush! Mission Accomplished! You are a Hero!

By comparison, the Mercer 2002 ratings -- before the Iraq invasion -- listed 2 US cities in the top ten: # 3 Honolulu and # 6 Minneapolis. At that time, lowest-scoring cities were in Africa. So the downfall has measurably occurred at Bush's watch.

And for the leftover republicans out there, who still think that environmental regulation is bad for business not to mention people, and who fail to envision a rational convergence of ecological, existential and economic interests, why don't you go to Zurich! Go to Geneva! At least go to Vancouver! The Mercer data settle the question. And if you're still hesitant, just today news came in that the Euro-zone is now the number one economy ... and the dollar is now falling below parity vs. Swiss franc. The results are in. Case closed. Smell the roses. That's what we get from the Big Republican Experiment. Thank you so much.

Oh, and here in Tampa, thanks to all the snarling SUVs, overweight trucks, and obese town cars, Hillsborough County just failed the EPA standards for clean air. Very very smart, everyone!

And pray tell, pretty please with sugar on top, remind me, why is Bush not yet impeached?

The markets are trembling.

The US Oil War that began 20 March 2003 is approaching its fifth anniversary. The blood for oil trade continues. Carbon emissions keep going up and up and up. Noncombatants die at the hands of overweight soldiers who'd rather be home with their families. Meanwhile Baghdad's weather is turning a bit strange. Back home, gas-guzzling SUVs drive around with "Support our Troops" stickers. The U.S. treasury is hemorrhaging dollars. The bleeding in Iraq goes on. Bush the war criminal, the world's Climate-Changer in Chief, remains unimpeached and out of jail. Americans continue to be passive and obedient, while their consumer society is sinking into a self-made crisis of unsustainability. After all, evil actions and self-reducing patterns are just two sides of one and the same coin. Perhaps the Having Mode hadn't been such a hot idea to begin with, for what goes against Nature's flow will come to an early end.

Time for a news update! 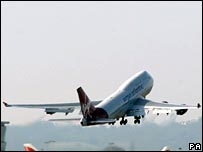