The British NGO Oxfam released a study that shows natural disasters have quadrupled as compared to 20 years ago, an increase due to global warming.

Here are data from another NGO, Germanwatch, a Bonn- and Berlin-based think tank and foundation focused on North-South justice, sustainability, and "climate protection" (Klimaschutz).

Germanwatch is affiliated with the US NGO Worldwatch Institute and publishes the European version of the annual State of the World Reports. It gets its funding from the Heinrich-Böll Foundation. Germanwatch releases the Klimaschutz-Index or "climate protection index". Here are links (pdf files) to the reports 2006 and 2007.

The ten largest CO2 emitters, in percent of world emissions, are:

The 2006 global average concentrations of CO2 were higher than ever in measurements coordinated by the World Meteorological Organization. The "climate protection index" by Germanwatch is a ranking determined by the national sum-total figure of per-capita CO2 emissions (50 percent: energy, transportation, buildings, and industry); the national power-related CO2 emissions (30 percent: national status quo); and the climate policy of the country in question (20 percent of the ranking number: domestic and international policies). The index is a ranking of the 56 nations that are collectively perpetrating 90 percent of global CO2 emissions. (For tables, cf. Klimaschutzindex 2007, p. 4-5; for calculations, l.c. p. 8-13).

So here's the Carbon Ranking 2007, with the good guys coming out on top, and the evil guys hitting rock bottom:

Nice going, USA! In ecological terms, you're rock bottom! Under the Climate-Changer-in-Chief, you're worse than Kazakhstan! Hahaha!

Happier news come from Australia, where the Climate-Changer-in-Second John Howard suffered a resounding defeat, and the Labor Party Leader Kevin Rudd won the election. (Note: in contrast to the USA, Australia enjoys fair and square elections -- while Ausssies have electronic voting booths, just like Gringos, they get printed receipts of their vote, unlike the Gringos, which makes it harder to manipulate numbers.) Indonesia, UK, and NZ congratulated Rudd's victory as a victory for Kyoto. Rudd won on a platform charging that Howard "is out of ideas". Rudd also signaled that the Aussies will pull out of Iraq. Meanwhile, water predictions for Queensland are grim, and there's crazy weather in South Australia and Victoria.

New Zealand's glaciers,whose meltoff made news in September, are making more news; NZ's NIWA (National Institute of Water and Atmospheric Research) reports that New Zealand's glacier melt is now quantifiable as an 11 percent loss in the past 30 years, and as a 90 percent loss in the 12 largest glaciers in response to global warming, and that without change in the snowline. According to J. Salinger/NIWA, NZ's big twelve "have passed the tipping point."

San Francisco's Bay Area Air Quality Management District is holding public hearings on whether fireplaces should be banned. They will have to ban them eventually since there's no choice -- it's part of the great cultural evolution now underway. Here's a good post by Kunstler on this cultural evolution. Here's the Red Cross advisory for drought-stricken Georgians.

The dollar keeps losing against the Euro. Here's a map of world oil reserves, with each country's size proportional to the amount of oil it owns. The size of Iran!! 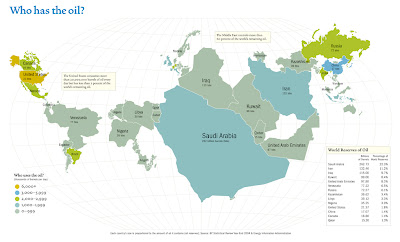 Meanwhile, Iran's prez wants to trade oil for Euro. US Grunts in Iraq commit suicide. (Note that the US deaths mentioned, 15,000, don't include combat-related fatalities recorded in Germany's military hospitals; neither do they include the classified numbers of mercenaries or "private contractors" KIA.) Joseph Stiglitz (Columbia U), 2001 Economics Nobel Laureate and formerly chief economist of the World Bank, published an informative essay on "the catastrophe that was the Bush administration, called Reckoning: the Economic Consequences of Mr. Bush. Rowan Williams, the Archbishop of Canterbury, declared in an interview that the US is creating the worst of all worlds.

And for those of you who want to know more about PEAK OIL, here's a great 1 min video by the cartoon animator Bruce Woodside (thanks Idleworm!)

The biospherical switch-over is speeding up. "Climate change is going faster than our worst-case scenarios five or six years ago." The United Nations, by the Framework Convention on Climate Change (FCCC), and via the Intergovernmental Panel on Climate Change (IPCC), issued the Fourth Assessment Synthesis Report (AR4). Here's the draft copy of the AR 4 Summary for Policymakers. News reports are by AP, NYT, Spiegel, IHT, and Nouvel Obs. Secretary General Ban Ki Moon sums up: we're at the tipping point. Immediate steps are needed to avert a global climate disaster.

Florida's landmass will shrink, either significantly or dramatically. The Everglades will salt up. We'll lose all the beaches. All of them. The remainder of dry land will convert into scrubland. The regional biome won't absorb the predicted change in precipitation patterns. Today, waiting in some office, I sat near a TV monitor; the talking head called what's happening a "century drought". Florida's rainy season has turned into a bizarre dry season. Things are getting worse in Georgia, North Carolina, South Carolina, Alabama, Tennessee, and Kentucky. There's also a drought in Montana. And in Virginia. The water crisis is on. For the same anthropogenic reasons, climate-change induced precipitation shifts, droughts are hitting South Australia, Western Australia, North New Zealand, and South China's crop-producing regions. There's a suicide wave among Australian farmers. Here's some basic info on climate change and food production, in an interview in the Washington Post.

And the worst power plant with the highest carbon emission of any point source on the planet (43 megatons/year), pollutes in Taizhong, Taiwan.

It's been less than two weeks since the last real news update (the green revolution speeds up), but somehow the events are, well, speeding up. Let's see what order can be imposed on the melee.

Mexico carries today's headline with the unprecedented surprise flooding of Tabasco state, the inundation of the state capital Villahermosa, the displacement of close to 1 million people, the rescue calls of 300,000 people, and the announcement by prez Calderon, who calls the event one of the worst natural disasters in the history of the country. There's excess water also in the USA, in a spot that had its fill already -- heavy rains flood part of New Orleans. Meanwhile, the fifth hurricane of the 2007 Atlantic season, Noel, soaked the Bahamas 11/1; the death toll is now at 120. Consistent with the expectation of increased seasonal swings, the 2006 season ended with "I" (hurricane Isaac), whereas this season is now at "N".

Climate modeling predicts a growing envelope of weather amplitude variation (in plain English: crazy weather, and worse to come). It also predicts a geographic shift of precipitation patterns -- too wet in one spot/moment; too dry in another spot/moment. So while there are floods in Mexico and Louisiana, there are droughts elsewhere. The NYT 10/21 had an in-depth feature on the dwindling Sierra Nevada snowpack (which provides most of the water for Northern California), the dwindling waters of Lake Mead (ditto Nevada), and the flow reduction of the Colorado River, the point being that the future is drying up. East of the Mississippi, a drought of historic proportions affects Tennessee, Alabama, Georgia as well as parts of the Carolinas, Kentucky, and Virginia. Florida doesn't have enough water for its booming population either, and much of U.S. could see a water shortage.

Meanwhile, there are record-breaking temperatures in NYC, with the city having been on the brink of the warmest October ever. Canada's glaciers hit a 7000 year low. India's tigers are being driven to extinction. The governments of the nordic nations Sweden, Finland, Denmark, Norway, and Icelands on 10/31 sounded alarm over the melting arctic. And as temperatures rise, Greenland greens.

Carbon emissions force the planetary climate system into a new hot steady state, and the hotter it gets, the quicker soil dries out. With heat comes drought, and with drought comes fire. The California fires of 10/19-26 are now record-holders; the flight of 1 million people by 10/23 was the biggest evacuation in California history. By 10/24, the property damage tallied up to more than US $ 1 billion. The was even a rare voice of dissent in the corporate media -- CNN of all companies admitted that the fires are caused by global warming. The fires produced 8.7 mio tons CO2, more than what, say, the state of Vermont produces in a year, and which creates a positive feedback loop--the more CO2, the more fire, the more smoke, the more CO2. Next to the poop loop, there's the fire loop.

The Nazis in the still-not-impeached gringo government staged a fake press conference at the Federal Emergency Management Agency, with FEMA workers playing the part of reporters. When found out, it backfired. Anthropologists and historians of the next century will have to seek their own answer to why gringos are so placid -- I'm at a loss here: the gringo Nazis fake press conferences, and the suburban zombies commute with support-our-troops stickers on their SUVs. No one strikes. No one complains. Everyone's on Prozac. And when some brave citizens do stand up against the gringo perpetration of climate change, it's the protesters that get arrested, and the perpetrators remain unimpeached.

America's Darwin awards now abound: Japan quits helping out with the neocon middle east adventure; Turkey no longer loves the U.S.; taking the global lead in the fight against climate change, the EU memberstates France and Britain are ready to lay out eco-friendly tax cuts; the U.S. torture methods were first used by the Gestapo (not exactly an winning ticket); the last days of the Petro-Dollar have arrived; Iran sells oil for Euro; the US dollar is in free fall against the Euro; the US threatens Iran with war; the new-and-improved corporate science in the US urges pregnant mothers to eat perfectly safe mercury-laden fish; the climate-changer-in-chief vetoed health care for American children, oil prices will likely to stay very high (funny that so few of my students ever talk about "peak oil"); America is past its zenith; the gringo-Nazis' foreign policy collapses; the most expensive commuter cities, with the dumbest infrastructural design, are Cleveland, Detroit, Cincinnati, Kansas City, and (yeah!) Tampa. [Full disclosure: the mad hun commutes by bicycle and doesn't belong to the ownership society.] And here's a slide show of the ten most livable cities on the planet, none of them in the continental U.S., of course. 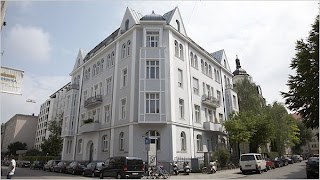 UK's The Guardian launches a new website with information how to reduce one's carbon footprint. Kunstler, of The Long Emergency's fame, posted a well-informed essay on the US Darwin awards called assumptions.

There's even a paleontological datum to note: until two weeks ago, we've known that the worst of all mass extinctions in the Earth's history, a quarter billion years ago, the event that ended the Permian and cleared the way for the Triassic, was due to climate change, and I've taught so only a month ago in the classroom. Turns out that not only one, but actually four out of the past five mass extinctions (at present, we are the cause of the sixth) were associated with greenhouse phases rather than icehouse phases. The researchers, predictably not in the U.S., are at York and Leeds; the paper's in Proceedings of the Royal Society B; you can get the non-technical info here; the paper (PDF file) is here. O yes, and an environmental audit for the UN, by UNEP, published 10/26, declares humanity's very survival being at risk. You can access the detailed Global Environmental Outlook (GEO-4) here. The world's carbon sinks are losing the ability to soak up emissions. As George Monbiot reminds us in his review of Cormac MacCarthy's The Road:

Have a nice day.