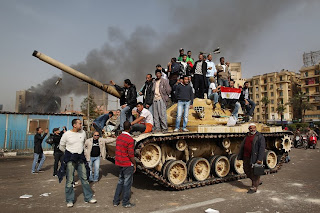 --climate happenings are at blisterdata--

2010 was the hottest year on record. December 2010 had the smallest winter sea ice cover in the Arctic on record. Surface temperatures in Canada and Greenland in that month ran 8-11 C (15-20 F) above normal. In parts of the Arctic, surface temps have been 21 C (38 F) above normal for more than a month. Extremely mild temperatures in the far north cause furiously cold weather farther south. Europe, East Asia, and the U.S. are suffering through another awful winter, with one snowstorm chasing another. Animals are dying of exposure in places as different as Vietnam, England, Lake Michigan, South Carolina, and Florida.

Information, technical and complicated, is streamlined and simplified. The findings by Petoukhov/Semonov (meanwhile reviewed at Real Climate) are now put more plainly, e.g. by A. Levermann (Potsdam): "global warming is melting the ice in the Arctic Ocean; this leads to high pressure areas above Siberia, which drives extremely cold winds towards Europe."

J. Overland (NOAA) puts this climate happening in the context of seasons: "as more sea ice melts, there is more open water to absorb the summer's heat. A day of 24-hour summer sun in the Arctic puts more heat on the surface than a day in the tropics. That extra heat in the ocean is gradually released into the lower atmosphere from October to January as the region slowly re-freezes months later than normal ... a large part of the Arctic Ocean is radiating heat instead of being cold and ice-covered. That has disrupted wind circulation patterns."

As a result, in south Florida, December was the coldest on record, followed by what looks to become the wettest January on record. That's the local meaning of "jumping the arctic fence".

Climate impacts culture. And at this point, it appears to me one can identify four levels of impact.

The first level, the lightest, is frivolous. Last week I browsed in the Jan 2011 issue of Garden Railway Magazine. The magazine featured an article of a beautiful garden railroad by a couple in Colorado, who describe the challenges to preserve the woodsy flavor of their trains, since Colorado's abnormal dry weather had killed all their spruces. Now they switch to hardier variants. The issue also featured an essay by a gent in Nevada. His trains were supposed to be desert trains, but now, as he writes, he needs to dump tons of poison in his yard, because Nevada's abnormal wet weather is turning his backyard desert green, lush, and weedy.

The second level is tougher, on the adventurous side. The freak snow in Washington, D.C., which shattered records in Philadelphia and New York, shut down the traffic flow, with the result that some motorists suffered a twelve hour commute from work (in Crystal City) to the 'burbs along George Washington Parkway.

The third level is life-threatening. The January 2011 issue of Scientific American features "Casualties of Climate Change," by A. de Sherbinin, K. Warner, and C. Ehrhart, pp. 64-71. The message is, first, that climate change has arrived, echoing what B. McKibben noted two years ago in Eaarth, and, second, that we can now interpret specific weather events as consequences of carbon emissions. Mozambique is "under siege" (p. 67) because "the climate is turning ever more unforgiving ... floods periodically inundate farms and towns ... droughts have become increasingly common". Vietnam faces "a rising sea" in the Mekong Delta (p. 68); "in recent decades extreme floods have increasingly threatened growing areas". Mexico and Central America face "deadly storms" and "crippling drought," making "migration forced by climate change ... the most important humanitarian challenge of the 21st century" (p. 70).

The fourth level is visible in Tunisia, Algeria, and Egypt. I think M. Klare (Hampshire College) was the first to connect the dots. As weather oscillations grow violent, and seasonal swings become sharper, crop yields are declining. Farmers love gentle weather: a bit of rain followed by a bit of sunshine. What they hate is downpours alternating with droughts. Crops rot in puddles or wilt in the sun. Storms tear off produce; deluges break stalks and push the grain in the mud. Harvests shrink. Climate change tightens supplies while demand stays constant. Food prices rise.

In much of North Africa and the Middle East, dictators rule with U.S. backing, human rights count for shit, unemployment is ridiculously high, the rich get richer, and the poor get poorer. These conditions have been normal -- and stable -- for decades. Now a new event happens: a climate-induced rise in food prices, just when people in these nations deal with falling wages.

Hence riots erupt. And since everything else gives reason for anger anyway, the riots spread and turn into rebellion. Pricey food is the tipping point. It starts with bad weather, and it ends with citizens storming their rulers' palaces.

Seventy-one months left.
Posted by Mad Hun at 21:43 No comments:

A new climate findings post is at the data bank. Instead of the usual setup -- the unfolding changes, understanding climate, mitigating the impacts, and civil evolution -- this is a research retrospective of the past year. Much of the post is the result of data-mining (info-scavenging? link-stealing?) of an excellent piece at Climate Progress. The regular surfer will have seen many citations here at blisterdata already, but together, in hindsight, their gestalt is compelling. The next 'findings' will return to normal -- to the extent 'normal' can still make sense now that runaway changes have started. Researchwise, 2010 was quite a year. Predictions are converging on the prospect that the USA, the country most responsible for the climate fuck-up, will be uninhabitable within the lifetimes of our students.

Flop sweat! Is it already time to reach for the Bible? Let's see. Romans 12:18-19: "Live peacably with all, and never avenge yourselves, but leave room for the wrath of God, for it is written: "Vengeance is mine, and I shall repay, says the Lord."

In eigener Sache, published is now "Amerigenic Climate Change: an Indictment of Normalcy," Human Ecology Review 17 (2010), 117-124. This is the courteous domestic version; the rude foreign version is forthcoming in Environmental Ethics for Canadians, ed. B. Williston (Oxford University Press). In press is "The Future of Faith: Climate Change and the Fate of Religions," in Religion and Dangerous Climate Change, ed. D. Gerten, S. Bergmann (Continuum).

A long-promised piece on Nietzsche and being is next.

Seventy-one months left.
Posted by Mad Hun at 21:23 No comments:

--climate happenings are at blisterdata--

The Climate Philosophy Newsletter 4 (2010-2011) is out. Climate Ethics is now officially a new branch on the tree of philosophy.

The Newsletter raises the bar in several ways. Resistance against the new field is on the defensive and, I believe, weakening. It was now possible to add a link to climate philosophy to the homepage (bottom right) of the Philosophy Department at the University of South Florida. It was not yet possible to put an "official" link (top right) at the homepage, but that's a detail. It was also possible to put the Newsletter on its own page at the university. It was not yet possible to give it an URL such as 'philosophy/climate/' or some such; it still had to be put on my faculty site. There were also reservations to paste the departmental logo on the climate philosophy site; some, it appears, feel more comfortable to keep climate at arm's length, but the College webmaster was agreeable to put a return link to USF philosophy on the climate page.

Interesting is also a generational divide regarding this new field. The Newsletter research section shows six members of the USF Philosophy department to have contributed in the past year. All of them are young. In the last department meeting, my announcement of the newsletter was met with somber faces by most colleagues my age. Senior colleagues, however, were happy and expressed their congratulations. This is how paradigm shifts happen: the old and the young can think outside the box, but the middle-aged ones "are" the box.

Noteworthy about the research section are the many publishers now involved in the new field, such as Continuum, Lit Verlag, Ashgate, Blackwell, MIT Press, Ria University Press, Oxford University Press, Cambridge University Press, Routledge, Taylor & Francis, Trinity, Earthscan, Fortress Press. The London-based publishing house Continuum appears to have cornered the market. Cambridge, Routledge etc. are trying to catch up. Apart from MIT Press, there is no single conventional US academic press that touches the new stuff yet, but considering that US Americans are largely at fault for climate change, this is not really a surprise. For Americans, countenancing the perpetration of climate change must be painful.

Five philosophy journals have published or have slated for publication topic issues on climate, such as Essays in Philosophy (2010), Human Ecology Review (2010), Critical Review of International Social and Political Philosophy (2011), The Monist (2011), and Journal of Global Ethics (2011).

In Florida, a state of forty-five universities with Philosophy departments and three research universities, a request for news distributed through the listserv of the Florida Philosophical Association led to zero (0) returns. The only thinkers reflecting on climate are at the University of South Florida and at the University of Central Florida. So it appears that the other formerly good schools -- University of Miami, Florida State University, and University of Florida -- are not viewing climate change as a topic deserving of conceptual inquiry yet. Well, let them.

In my department, there are four (!) dissertations in the works related to climate philosophy -- one on the metaphysical underpinnings of our environmental and climatic crisis and how to respond through Heidegger and Daoism; another on how the perspectives of Spinozism and Deep Ecology elucidate the challenges of climate change; a third on Latin American climate philosophy, and a fourth one on organisms, environments, and climate change in light of Leopold and Lovelock.

Climate ethics is now a worldwide endeavor. Conferences and workshops 2010 happened in Potsdam, Liverpool, Uppsala, and La Laguna; 2011 meetings are planned at Florianopolis and Prato. In East Asia, to my knowledge, research on climate ethics is done by friends and colleages at Beijing's Chinese Academy of Social Sciences, at Taiwan's National Central University, at Taipei's Academica Sinica, at National Taiwan University of Science and Technology, and at the National University of Singapore.

With the survey of 2010 research it's official: Climate Ethics is a stout new branch -- not a fragile twig -- of philosophical inquiry. Climate Philosophy proper, however, is another matter and hasn't yet left the starting line, for good reason, and here is why (p.22).

Seventy-months left.
Posted by Mad Hun at 22:35 No comments: