Wahnsinn! Is it my imagination, or is the information really surging? So much happened in the past few weeks that a review of natural and human dimensions of climate change is reeling in the data surf. But it's all good. I'm happy that, as they say, the chicken comes home to roost. It's time. The events are playing out as expected. Peak oil is invading the lifeworld. The food crisis is happening. The biofuel alternative has failed. The American lifestyle, which created climate change in the first place, is being questioned even by the Americans and has emerged as a style that cannot be universalized. The biospherical costs of China's emulation of this lifestyle make it plain, as one of our students put it, that "China needs to take one for the team." Foreigners watch the American decline with worry but also with relief. The gloves are off in transatlantic dialogues -- although it hardly made news (but see also here), it's unprecedented that a German minister can state, without reprimand by chancellor, parliament, or public, that climatewise, Gringos are Neanderthals. Even in planetary terms, a villager can act like a moron and pretend to be retarded only for so long before the community regards him as the global village idiot and starts talking down to him accordingly.

The Gringo Square has four corners: the red-eyed Baby Jesus angle, in which the biosphere is static, a means, and about to end; the Adam Smith angle, in which free markets are the final solution; the David Hume angle, in which the causal chain linking US lifestyle to global warming breaks down into a skeptic's cognitive disconnect; and the angle of Ayn Rand, a selfish bitch who moons the globe.

And now these things, formerly so obscure and esoteric, evolve into trivial truths, which is fair enough. In this post, I shall arrange data under the following headings: climate change events; climate policy events; climate mystery meat; global milieu; enlightenment, and dis-enlightenment--and that should do it for the next two weeks.

Today was Earth Day. It was a beautiful day throughout. Now it's a few hours after dusk. A few hours after dawn, with the sun still hanging low in the sky, we headed out and into the forest near the river, a mix of oak-palm hammocks and sandy pine flatwoods. Trails are maintained by a group of mountain, uh, swamp bikers. They're nice and don't mind barefoot optimodal runners. I'm happy that more and more people around here discover and enjoy the woods. I'm a bit weirded out, though, that these "greenest of the Green" around here tend to drive gigantic SUVs, GMCs, Tundras and the like. What's up with that? Eventually some foreign anthropologist is going to write a book on this: in the Southern US, driving a two ton elephant with studded tires and a bike rack on back signals local love of nature.

Later I bicycled to work. From home to campus there are no bike paths; the Tampa city government hasn't figured out how to build them yet. So I head out on a 50 mph four lane road, balancing at the paved edge while the snarling grilles, chrome bumpers, spinning hubcaps, and roaring engines zoom by, and try to stay on the lookout for inattentive drivers -- which requires to violate road regulations and to bike against the traffic flow. But then again, how else to be safe and to see the Americans? (A thought for comfort: only dead fish float with the current.)

Zipping across the Citgo 7-11 parking lot makes me marvel, like every day, about peak oil and rising gas prices. A speaker once came to a class I taught on sustainable community design, and he told us that the Tampa Bay area would build a light rail mass transit system only if it were profitable, but as long as the gallon of gas costed less than a buck, mass transit wouldn't pay for itself. Yet one cent higher than $ 1.00 per gallon, and all the numbers would start checking out. That was -- when? 10 years ago? Now it sells for $ 3.49/3.61/3.71, with diesel at the Shell Station at $ 4.15, and they still don't allow trains or trolleys around here. Buses are few and far in between; with bus stops without schedule or shelter, so you can't use them. Thus all Americans drive. And one Mad Hun is bicycling. I see one Chinese man who walks. How high do prices need to go before patterns will shift?

On campus, there is Earth Day celebration. The Anthropology club is there; the Philosophy organization shows up, and there are tables with stuff. I stop and chat with the good folks there. I see one (1) other professor. The University of South Florida has one thousand (1,000) faculty and staff. I see about twenty (20) students there. The University of South Florida has thirty-five thousand students. This is the Green Revolution 2008 at a Florida research university -- less than one tenth of one percent care. I smile and roll on.

This is the last week of classes. The Climate Seminar -- the last one the Honors College allows -- is coming to an end. The students give concluding presentations and are turning in their research papers. When I compare their performance to how we began in January, I'm happy to see how much they've learned. Spring term started a week after the year of records had ended. And what had happened since then? The world seems to be tumbling beyond last year's tipping point into the first phase of real instability. There are now food riots in the developing world; food shortages in the developed world; and the first signs of food rationing in the United States (see also here; for the blog reaction abroad see here).

The former chief economist at the World Bank, Lord Stern, told the Financial Times on April 17 that the Stern report on climate change underestimated the risks of global warming ... and should have presented a gloomier view of the future.

But at least the German government has finally grown itself a set of brass balls. What brought this on was that on April 16 the climate-changer-in-chief acknowledged that "here in Washington, the debate about climate change is intensifying." Ain't that great? The moron-at-the-helm, the US Petro-Nazi, now thinks that there is a debate!

So Sigmar Gabriel, Germany's Federal Minister of the Environment, put out the following press release (I translate):

The [U.S.] president gave a disappointing speech, which fails to do justice to this global challenge. His words fall behind [the 2007 Climate Summit at] Bali; indeed, they even fall behind [June 2007 G-8 Climate BS Summit at] Heiligendamm. In Paris, today and tomorrow, there is the third Meeting of Major Economies (MEM). Bush's speech carries the risk of undermining the MEM process, which had been initiated by the United States. Without binding emission caps and reduction goals for the industrialized countries it will be impossible to stop climate change. Europe and the US must lead if others are supposed to follow. But instead, the [American] president, with his proposals, is hopelessly lagging behind the problems. His speech could be summed up in the words: losership instead of leadership. We are glad that there are also other voices in the USA.

Neat about this German government declaration is the title of the official release: it says Gabriel criticizes Bush's Neanderthal speech.

At the University of South Florida, things are surely looking as if they're now slipping into the long emergency.

The great downsizing has begun.

Three five departments in the humanities may be disbanded.

There are alternative views on the role of the humanities regarding climate change, but never mind. 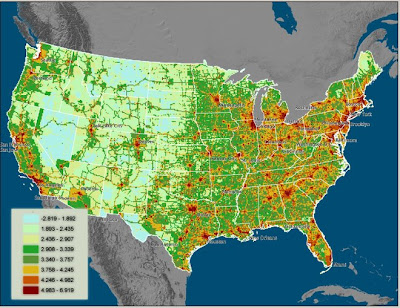 High-res here (thanks Wired). This image shows carbon footprints. The bluer, the better; the redder, the worse. Here's the Vulcan Project video on quantifying fossil fuel CO2 emissions over the US, by the Earth & Atmospheric Sciences at Purdue. The New York Times calls this visualization quite politely "the breath of a nation".
I'd rather be frank and call it "the exhalation of climate change".

The Sanity of Downshifting 3.28.08 Ecologist

And like whoever wins the presidency, Obama can never acknowledge any significant truth, such as that the nation is waaay beyond being just broke, and is even a net debtor nation to Mexico, or that the greatest touch-me-not in the US political flower garden, the "American Lifestyle," is toast.

The Arctic Ocean is melting, and it is melting fast. This past summer, the area covered by sea ice shrank by more than one million square miles, reducing the Arctic icecap to only half the size it was 50 years ago. For the first time, the Northwest Passage--a fabled sea route to Asia that European explorers sought in vain for centuries--opened for shipping. Even if the international communtiy manages to slow the pace of climate change immediately and dramatically, a certain amount of warming is irreversible. It is no longer a matter of if, but when, the Arctic Ocean will open to regular marine transportation and exploration of its lucrative natural-resource deposits.

The Arctic has always experienced cooling and warming, but current melt defies any historical comparison. It is dramatic, abrupt, and directly correlated with industrial emissions of greenhouse gases. In Alaska and western Canada, average winter temperatures have increased by as much as seven degrees Fahrenheit in the past 60 years. The results of global warming in the Arctic are far more dramatic than elsewhere due to the sharper angle at which the sun's rays strike the polar region during summer and beause the retreating sea ice is turning into open water, which absorbs far more solar radiation. This dynamic is creating a vicious melting cycle known as the ice-albedo feedback loop.

Washington must awaken to the broader economic and security implications of climate change. The melting Arctic is the proverbial canary in the coal mine of planetary health and a harbinger of how the warming planet will profoundly affect U.S. national security. Being green is no longer a slogan just for Greenpeace supporters and campus activists; foreign policy hawks must also view the environment as part of the national security calculus. Self-preservation in the face of massive climate change requires an enlightened, humble, and strategic response. Both liberals and conservatives in the United States must move beyond the tired debate over causation and get on with the important work of mitigation and adaptation by managing the consequences of the great melt.

ON THE ECOSOPHICAL RADAR SCREEN: